Here are a few brief case histories that client guardians are happy for me to share.

'Don't try this at home!' Always get advice from trained specialists.

This beautiful 5 year old goat has suffered with an allergic reaction to mange all her life. Her guardian has done an amazing job keeping her pain free using a combination of veterinary injections, spot-on treatments, skin salves and daily attention. I offered Goatee a selection of essential oils which all proved to be too strong for her, so I offered dried herbs, powders and energy healing, which have suited her sensitivities.

She devoured dried Rosehips, Rosehip Powder and Rosehip infused sunflower oil. She was very excited by my box of extracts and enthusiastically continued to eat dried Marigold petals, dried Nettles, Chickweed and Powdered Barley Grass, preferring it to be mixed with water. She kept returning to these staples throughout the session, but also ate Yarrow flowers, Devil’s Claw, Bladderwrack, Chamomile flowers and Meadowsweet. I finally offered her some Chia seed, which again she devoured. All these natural extracts are helping to strengthen her compromised immune system.

I made up a gel of Aloe Vera, Neem and Vitamin E. Once with Goatee I offer her Coconut oil and re-introduced Benzoin and German Chamomile essential oils, all of which she selected. I added these to the gel and asked her guardian to apply particularly around the udder, genital area, legs, belly and rump.

Goatee was very receptive to energy healing and sat peacefully during our one-to-one time together. The photos below show a healing timeline. 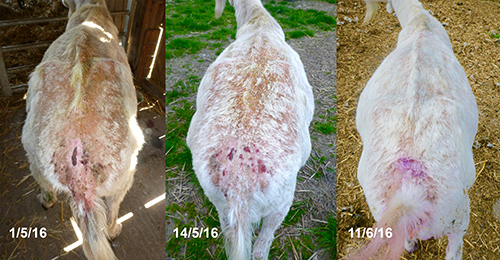 I was delighted to be able to help Goatee self-select and felt privileged to have worked with her and her guardian for their highest good.

This ewe was separated from her flock and was very thin, not eating or ruminating. She was put in an isolation pen where I treated her. I started with peppermint and black pepper essential oils for digestion. She strongly favoured the peppermint and stood up to get nearer. She was not interested in any other oils offered, so I added drops of oil to 2 litres of fresh water. She drank a little and hung her head over the bucket, inhaling deeply. 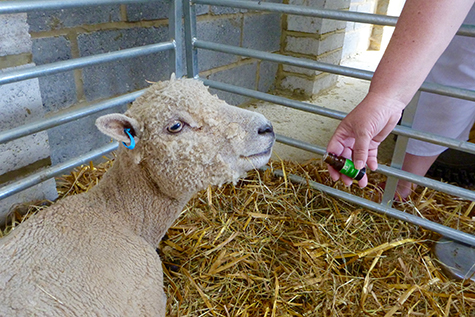 I offered her a variety of dried herbs and her only choice was Comfrey. I left her with the comfrey, fresh water and peppermint water overnight. By the morning, she had eaten the herbs and drunk most of the peppermint water. She had started nibbling hay and cudding. Her carers refreshed both waters and dried comfrey. 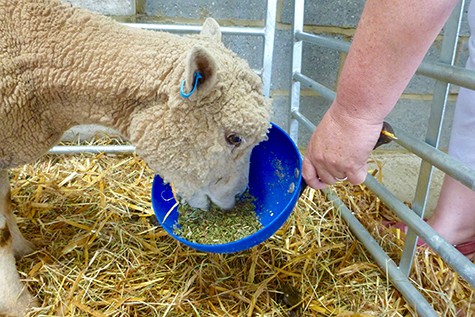 I revisited her after 2 days. She seemed to recognise me, got up, looked at me, then at her empty bucket, then back to me. I washed and refilled the bucket and as I returned she smelled the peppermint water and then leaned towards me touching her nose against mine! I believed that to be 'sheep' for Thank You! 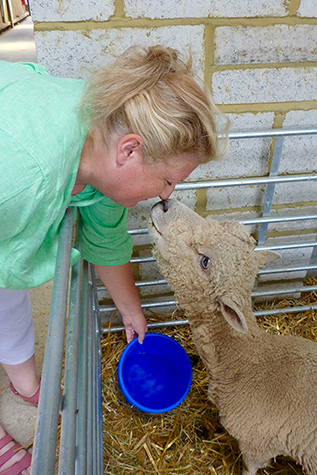 She is now with a smaller flock and seems to be well and putting on weight. I did see her one more time and she had no interest in peppermint, but still enjoyed a small handful of comfrey.

Pippi is a mare who had a bad dry cough, wheezing and breathing heavily from her stomach. Her owners have changed from hay, to soaked hay and now to haylage, changed her previous straw bedding to half shavings and she is turned out daily.

I worked with Pippi early morning, every day for a week. Our first Session took 85 minutes and her choices included:

Angelica (opening up to healing and instilling peace)

Rose Absolute (releasing past or present trauma and balance hormones)

Frankincense (for her fear and stress related breathing problems) 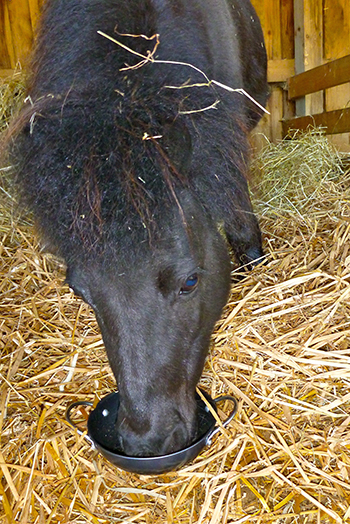 One thing that stood out was that she only allowed me to approach her from her left side, in the back corner of her pen. She brought her head around to me and inhaled oils with her right nostril. 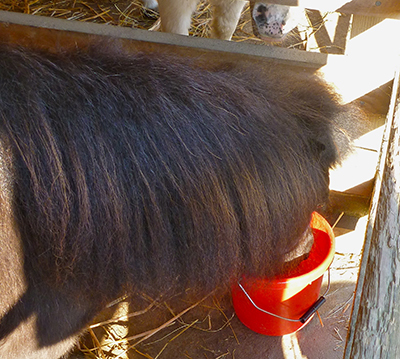 Enjoying a deep draught of Peppermint in water

On my penultimate visit, she whinnied and came to the gate with her head over the fence. I felt very honoured and quite emotional. She enjoyed Linden Blossom, and started licking at the bottle, then lowered her head and I rubbed it on her forehead and poll, she moved nearer and sideways offering her throat. I stroked the Linden Blossom on her throat and chest for several minutes. She was very calm, with softened eyes, then came out of her reverie by coughing twice and seemed to get angry with her neighbour. I offered Frankincense, because I felt she was frightened, she smelled strongly and re-offered her throat and neck, which I stroked with Frankincense. She walked off and had a very milky yellow urination, swayed slightly and then coughed. She passed droppings and started long coughs. She stopped coughing, but did not return to me. I watched her for 10 minutes, while she happily enjoyed fresh grass in the sunshine and she did not cough again.

On my last visit, Pippi was ready and eager and ate 3 handfuls of Rosehip Shells, smelled Eucalyptus and very strong smelling of Garlic followed by sucking and processing. I refreshed Garlic water, which she stood over. Very interested in Tea Tree, sniffing and shaking her head, she started sucking again and went and hovered over Peppermint water. She stayed there long enough for me to feel we have finished and when she moved, I turned her out.

My Final Recommendations were for her to stay outside in the day and to be closely monitored. Her carers left her in the field and none of them heard her cough at all. I left the owners with Peppermint and Garlic oil to make up buckets in her stall for night times, stopping when she no longer drank from them.

I revisited in a week, but felt she responded well and is a happier and healthier pony than the one I first met.

Rosie is a 2 year old rabbit, whose companion ‘Violet’ died very suddenly from unknown causes. Since Violets death, Rosie had stopped eating and drinking and just sat on an area of bare earth next to where Violet is buried. She is usually very friendly and active. Her owner took her to the vet in the afternoon and was told her stomach was empty, but other than that there seemed to be no illness. The vet gave her an antibiotic an hour before I arrived and the owner was told to wait and see if she improved. 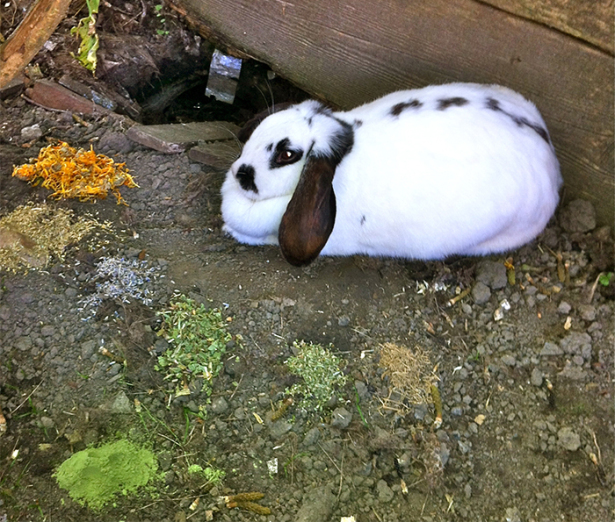 I treated this case as First Aid over 20 minutes. I put small piles of dried extracts around her first, many of which she showed no interest in, (Nettle powder, dried Comfrey, Yarrow flowers, Slippery Elm, Valerian and Rosehip Shells).

She was interested in calming dried Lavender first, followed by a very strong interest in Marigold flowers, which are associated with sadness, but might also coat her stomach to neutralise any tannins ingested. Rossie then took Rosebuds (which help with trauma) into her mouth as if eating them, but dropping them out again.

I offered Spirulina because it is often chosen for unidentified problems, she took 2 licks followed by 4 licks of chalk powder, which like us, we often take to help with stomach problems. Rosie moved to sit on the Marigold flowers and after a while began digging at the Yarrow flowers, eventually lying across both of them. As she had been active I offered her fresh water and she drank continuously for several minutes.

I moved on to offer her essential oils and she repeatedly sniffed Wild Yarrow. After smelling Carrot Seed, she started washing herself. I offered her Jasmine as a “hug in a bottle” with no interest, but she licked continually with Mimosa, which is a more masculine version to Jasmine. She wandered off around the garden returning to choose dried Peppermint, eating a small amount before returning to eat Rosebuds. 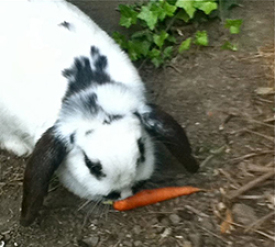 Rosie eating after the session

I was unsure how Rosie would react, if at all, but her responses were easy to gauge and very obvious. Both her owner and I were delighted when she started to drink after a relatively small intake of Spirulina and Chalk and then moving around in a more normal way before eating voraciously.

This case study is one of many published in Caroline Ingraham's book, 'How Animals Heal Themselves'.

Graeme and I adopted 3-year-old brothers. Their previous owners having moved home, both cats had severe flea allergies and gingivitis, Puck has an unusual breathing pattern and had needed several teeth extracted. Loki is the more dominant cat, strong with thick coat and good appetite. Puck is more needy, very thin, with clumpy coat and brown 'sleep-dust' around his eyes. Both have had diarrhoea and Puck was not interested in eating, even though lots of choices of food have been offered. Both are loving and animated. 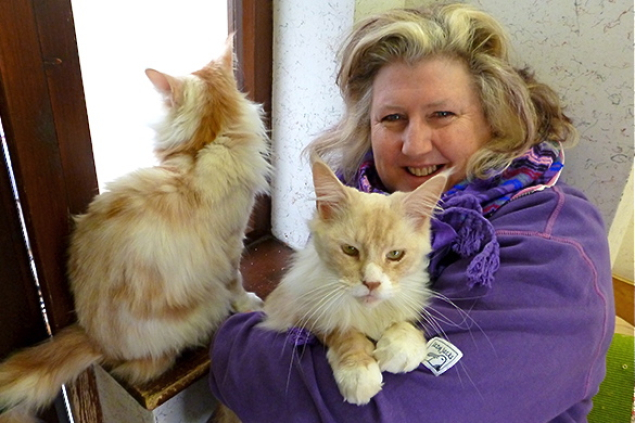 I have chosen the oils mainly for Puck but decided to have them both in the session as they get stressed and distracted when separated.

We started the session with an Indoor “Herb Garden” to introduce the cats to the aromatics in a calm and enjoyable way. Dried Catnip (eaten as a sedative), Rose Buds (for past and present trauma), Valerian Root (hyperthyroid /calming), Lavender (calming) and Marigold Flowers (bag chosen by Puck – possibly for skin or stomach disorders and for sadness).

Loki was highly interested in smelling and licking the catnip, played with it for an hour, then curled up asleep next to it! Catnip when inhaled acts as an excitor, but as a sedative when ingested.

Puck avoided the herb garden but sniffed at a distance then gently pawed at catnip. He inhaled and processed many essential oils and finally went to his bowl to eat.

I left the Herb Garden out overnight and woke up to hear the brothers racing about the house, catnip and rose buds thrown all around the carpet.

The indoor, dried 'Herb Garden' can be purchased and posted direct from 'The Tranquil Cat'.

Never use essential oils with cats unless you are a trained AZ feline consultant. Oils can be very dangerous particularly if put onto the animals.

I worked with the cats each day using a variety of oils. Puck chose Sweet Orange, Barley Grass, Frankincense, Seaweed, German Chamomile, SJW, Angelica Root/Rose, Wild Yarrow (underlined are those most strongly chosen). After a week he showed no interest in any aromatics, but had a strong appetite and finally solid faeces.

18 months later, and after much zoopharmacognosy and vetinerary treatments Puck weighs in at 7.2 kilo’s (a gain of 2.2 kilo's).

Both boys are now strong, healthy and very much loved.